Maharashtra Political Crisis Shiv Sena leader Sanjay Raut said the party is very big and cannot be hijacked so easily. It is made of our blood. Many people sacrificed to make it. No one can break it with money.

Mumbai, ANI. Shiv Sena leader Sanjay Raut has made a big claim amid the ongoing political crisis in Maharashtra. Shiv Sena leader Sanjay Raut has said that we are sure that once the (rebel) MLAs come back to Mumbai, they will again return to our side. Along with this, he has also advised Devendra Fadnavis. He said that I would advise Devendra Fadnavis (BJP leader) not to get involved in this matter and save whatever is left for his dignity. We will see each other in the election.

Raut said – no one can hijack Shiv Sena

Shiv Sena leader Sanjay Raut said that today’s executive meeting is very important. Many decisions will be taken in this meeting. This party is a very big party in the state and in the country. Balasaheb ji, Uddhav ji and all the workers have shed blood and sweat in forming this party. No one can easily rob this party. One cannot buy a party on the basis of money alone. We do not consider the crisis that is present now as a crisis, but it is a big opportunity for us to expand the party.

Let us inform that Shiv Sena has called a meeting of the party’s national executive at Sena Bhavan at 1 pm today. Chief Minister Uddhav Thackeray will attend this meeting through video conferencing. Many important decisions can be taken in this meeting. Apart from this, rebel Shiv Sena leader Eknath Shinde has called a meeting at the Radisson Blu Hotel in Guwahati this afternoon to discuss the future course of action. In this meeting, the rebel MLAs will brainstorm about the political developments in Maharashtra.

In view of the ongoing political instability in Maharashtra, the Thane district administration has issued an order banning any political procession, gathering or slogan-shouting in the district till June 30. Thane Police has currently imposed Section 144 CrPC in Thane city.

Previous Article Amit Shah took a dig at Congress’s ‘Satyagraha’, said- Modi had appeared before the SIT without ‘drama, dharna’ 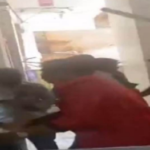 Next Article VIDEO: Rebel MLA Tanaji Sawant’s office vandalized in Pune, Shiv Sena leader said – no one will be spared