The vehicle is likely to get a 9-inch touchscreen infotainment system with wireless Apple CarPlay and Android Auto connectivity and a digital instrument cluster. After launch, it will compete with the Hyundai Creta Kia Seltos Toyota Urban Cruiser Hyryder.

New Delhi, Auto Desk. Maruti Suzuki India has started the official bookings for the upcoming car on July 20. The company has also announced the name of this upcoming vehicle. The name of this mid-size SUV will be Grand Vitara. This vehicle is expected to be launched in the coming festive season.

Maruti recently launched an all-new variant of the compact SUV Brezza, which has been priced between Rs 7.99 lakh and Rs 13.96 lakh (ex-showroom).

New Maruti Grand Vitara Features
Talking about the features, the interiors of the Grand Vitara can be offered with features like soft leather dashboard, leather steering and sunroof to enhance its premium feel and appeal. The vehicle is likely to get a 9-inch touchscreen infotainment system with wireless Apple CarPlay and Android Auto connectivity and a digital instrument cluster. The Grand Vitara is likely to come equipped with a 360-degree camera, a heads-up display, ventilated front seats, a wireless charger, an electric sunroof and leather upholstery.

Grand Vitara Power Train
Mild and strong hybrid engine options will be available in Grand Vitara. Like the Hyryder, it is likely to be powered by a 1.5-litre mild-hybrid petrol engine mated to a manual and six-speed automatic transmission. As far as the strong-hybrid variant is concerned, the Grand Vitara will use Toyota’s 1.5-litre petrol engine, which will be mated to an e-CVT unit powering the front wheels. 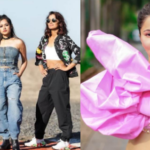 Next Article Khatron Ke Khiladi 12: Rubina Dilaik frozen in snow, Rohit Shetty made fun of Sriti Jha, this contestant was out of the show